Potatoes probably don’t get as much credit as they should for being affordable, plentiful and outrageously versatile. They are a member of the nightshade family, which also includes eggplant, tomato and bell peppers as well as a few less reputable members (atropa belladonna, or deadly nightshade shares the familial name), and their introduction to Europe is largely credited with making the European population boom of the 19th century possible.

All of this considered, it would be a shame to simply open a box of dehydrated instant mashed potatoes this Thanksgiving, especially when there are only so many vegetarian side dishes to begin with. Below is a quick and easy recipe using Divina roasted red and yellow peppers that can turn the potatoes at your Thanksgiving from an afterthought to a star of the meal.

Olive oil, vinegar and fresh herbs add layers of flavor to the potatoes, which should crisp nicely in the oven. The roasted peppers, for their part, provide a sweet tanginess that complements the potatoes nicely (they are, as we learned, members of the same family). Whether or not you’ll have a vegetarian at the table this Thanksgiving, these potatoes are a great way to make sure people won’t just be asking for seconds of the turkey. 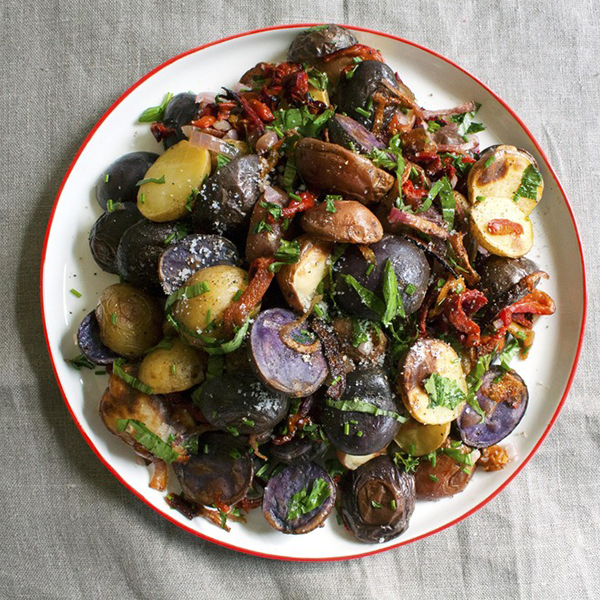 A brief history of Chanukah and olive oil