Football season is back, and love it or hate it, it’s an undeniable fact that the landscape of Sunday eating is about to change for the next 6 months.  I only really started following football a few years ago, however long before that I had developed a serious taste for “football foods”; wings, dips, nachos, chili, burgers and the occasional foot-long sandwich. So, as I reasoned, watching a game I understood nothing about for a couple hours was worth it if it meant I got to sit in front of a family-sized tray of buffalo wings for the duration.

Buffalo wings (alternately chicken wings dressed with any non-buffalo sauce) are arguably the premier food for sports viewership. They are filling, spicy, shareable and most importantly, you can eat them with one hand while using your other to gesture wildly in support of your team. Of course, a buffalo wing is only as good as the blue cheese dipping sauce that you serve with it. The problem with many blue cheese sauces and dressings, however, is that the actual taste of the cheese is lost in an attempt to make them less pungent and more “palatable”.

This dip recipe came about in an attempt to preserve that sharp blue cheese taste while adding both the texture and sweetness of green Mt. Athos olives. Using the Divina Blue Cheese-Stuffed Olives was a no-brainer, since the olive juice is already infused with the flavor of the cheese, and that’s exactly the flavor we’re looking to enhance. It can end up a bit thick after mixing the ingredients, but adding more milk is a great way to thin it out.

The dip was a success and had enough flavor to complement to the potent buffalo sauce already on the wings without being overpowered. The olive pieces also gave it a sweet, fruity element and provided a nice textural change from a typical, watery blue cheese sauce. 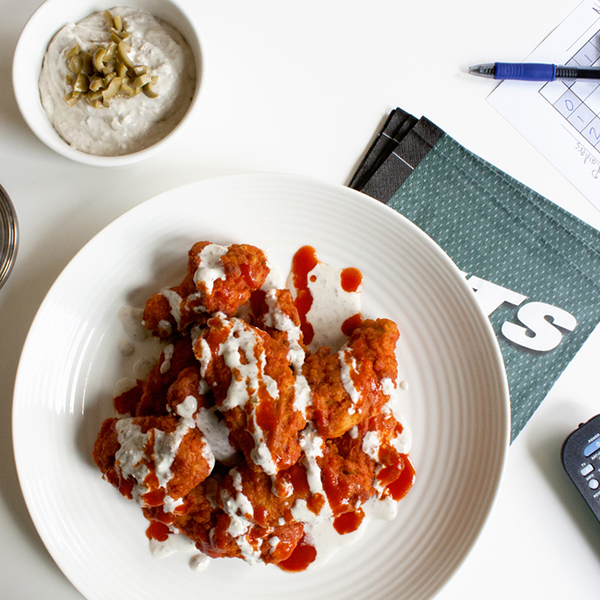